A nice introduction to Rust from a JavaScript developer perspective.

The first time I read about Rust 🦀 it didn't pique my interest. Around two years ago, I was working as a web developer, mostly using JavaScript and I thought Rust wasn't for me because it looked really difficult at that moment.

At the start of this year, I decided to start learning Rust on my own. What has changed during this time? I am still a web developer but knowing that I will be able to write a program in Rust, compile to WebAssembly and execute it in the browser has been the spark that ignited my motivation.

In this post, I am gonna present Rust from a JavaScript developer perspective doing some side-to-side comparisons. I hope it will motivate you to give it a try!

The Rust programming language was created by Mozilla and its first stable version was released around 2015. It looks like this:

It doesn't look so scary, right? You could say it almost looks like JavaScript but that's just the hello world program and it's a bit more complicated! Before looking at some features of the language let's place Rust in the programming languages spectrum like this: 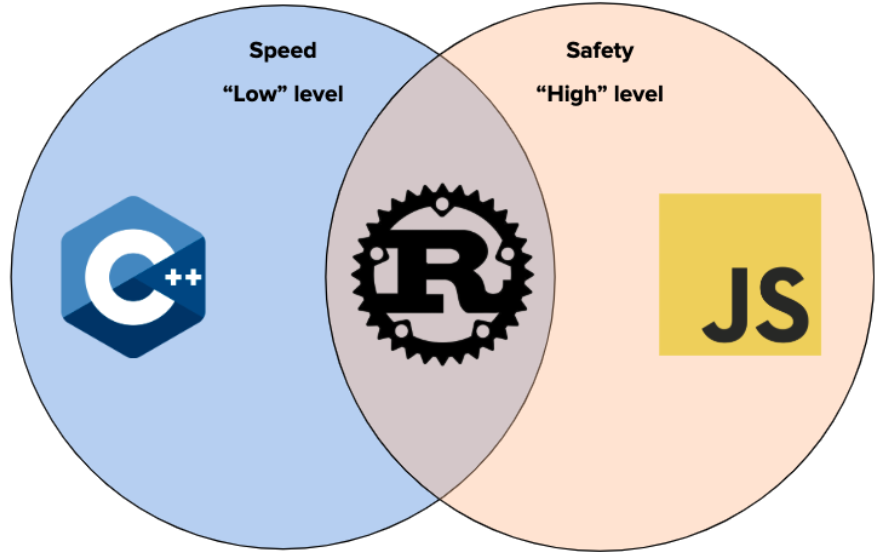 There is a clear distinction between programming languages:

Rust can be considered both fast and safe but it doesn't come for free: there is a steep learning curve and the compilation time can be a bit high even for small examples.

Like any programming language, there is a lot to cover but I decided to focus on four topics that are essential to learn the language and start working on it.

JavaScript is a dynamically typed language, and we can do some fun things like subtracting the number 1 to the string wat and obtain unexpected results. This is possible because the type system is not strict. In Rust, if you try to perform a simple addition of two numbers that are not of the same type you get a compilation error:

You will get a lot of errors when you start working in Rust and you will probably hate the compiler at first:

If you feel like this dog and you are constantly fighting the Rust compiler don't worry! We all have been there.

Functional languages are very well-known for working with immutable structures. As JavaScript developers, we are not forced to work with immutability but popular libraries like Redux and Immutable.js taught us these good practices. Today we have the let and const keywords to declare mutable and immutable variables respectively.

In Rust, we are gonna use just let to declare variables, and they will be immutable by default. If we want to use mutable data we need to add the mut keyword to the declaration like this:

In my opinion, this is the hardest concept to learn Rust because it is really different from other languages that I worked on but this is the key that makes Rust fast and safe to use!

When you assign some data to a variable it is said that the variable owns it and every piece of data can only have one owner. Let's see this in action:

In Rust there is no null and undefined values, so we cannot use a variable that doesn't have a value. In the previous example when we assigned a to x we are moving the value from x to a so at this point x doesn't have a valid value. The same happens with functions:

When we call the method do_something we are moving the value from x to s, the argument received by the function. After executing the function we return to main and x doesn't have a valid value anymore.

The previous behavior is not always desired and that's the reason that in Rust we can borrow things! If you don't want to move a value from a variable to another one use references like this:

When we are dealing with ownership and borrowing the Rust compiler wants us to play nice so it will warn us if you we try to do something wrong:

If you are confused after learning about ownership and borrowing it is ok! Your brain has started to deal with memory management and it can hurt sometimes. I recommend you watching this video to learn more about this topic.

Rust is not an object-oriented language but it has some features that can emulate some behavior present in that kind of languages. When we work with classes in JavaScript we are dealing with both data and methods in the same place. In Rust, we are gonna separate the data representation from the methods that manipulate it like this:

The struct Dog looks pretty similar to a JavaScript object but it's not. The struct is the shape of some data that will have two named fields: name and score. Below the struct you can see an implementation block (impl for short). We can declare methods that will manipulate the data like this and notice that if we want to associate the function with that data we need to pass self as the first argument. It kinda looks like Python, doesn't it?

If we omit the self value we are declaring a method that is not associated with any particular piece of data. You can think of it as a static method in a JavaScript class.

What can I do with Rust?

The first thing you need to do is install Rust and it cannot be easier. Visit the https://rustup.rs/ web to download the official toolchain installer. It is kinda similar to the nvm project that is commonly used with JavaScript.

Then you are gonna need some libraries so don't start from scratch. In the same way as we have Node packages in JavaScript we are gonna deal with crates in Rust. Visit crates.io, the official crates registry, to know more about Rust crates.

Since Rust is very versatile there are a lot of topics where Rust can be used and the community has made a good effort to track them in different websites:

Finally, if you are doing web development you are lucky! You can create programs, compile them and use it all together with your existing JavaScript code. The technology that made this possible is WebAssembly and it can be used right now in all modern browsers.

If you want to try it I recommend you to read the official Rust and WebAssembly book.

Rust is a really cool language to learn and you could build a lot of things with it! If you are a web developer like me you will find the whole WebAssembly topic very interesting and I hope I can write future posts about it.

If you want to start working with Rust I recommend you checking the official book and try to write some existing JavaScript programs with Rust. As a lot of things practice is the key!

Finally, this blog post was inspired by a talk that I presented in the JS Coders meetup event and you can check the slides here.